Spring to the rhythms of hip-hop

In a long-awaited collection, which was kept secret until the day of the fashion show, Felipe Oliveira Baptista presented strong shapes and patterns inspired by street culture. 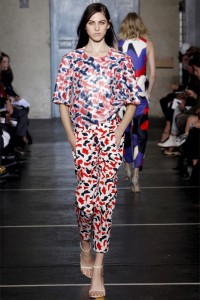 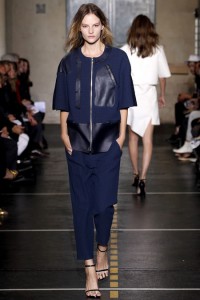 The «freedom» and «strength of creativity» of hip-hop and graffiti were the starting point for Felipe Oliveira Baptista in creating new proposals for next year’s warm season, which were presented at the Buffon high school gym in Paris.

«It is good to arrive and not know anything», sustains the designer who kept secret about the theme of the collection. «The impact that the person feels when he sees them [the proposals], without prior knowledge is greater», he believes.

Straight, simple and strong lines marked this collection, where graphics and prints had a central role. «In terms of graffiti, when they began to draw them, the names and letters were enlarged, dissected, transformed. I tried to apply that same logic to my style in cutting the pieces, in volumes, and also in the use of patterns», he explains. 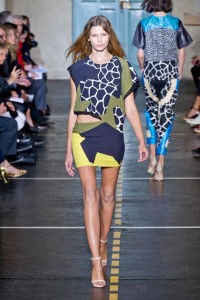 As for the colours: blue, brown, white and green were the ones most seen on the runway, with touches of red, yellow and orange. In terms of the materials, furs, glued with knitted jersey, and a silk/nylon blend in one of the pieces, took the leading role. «The textiles are, nowadays, a great part of innovation in fashion», he assumed.

In the end, the applause reverberated in the high school gym of the 15-century neighbourhood of the French capital, proving that the designer, who is also artistic director of Lacoste, has ever more fans in Paris. «This is where all the buyers go through; it is a platform for easier visibility», as he mentioned.

However, even though he’s been living in France for 10 years, Portugal continues to be on the map of presentations of Felipe Oliveira Baptista’s, who is expected to return to the country at the end of this month to show this new collection at Portugal Fashion.

The architectural elegance of Luís Buchinho’s proposals for spring-summer 2013 definitely conquered the women of the great...