La Paz is proud to be a Portuguese menswear brand. Stories from the sea, love for the Atlantic and for our grandparents’ clothes are the starting point for José Miguel de Abreu and André Bastos Teixeira. Closely teamed up with the best artisans and local producers around, the two friends connect feeling with fact to reinvent the classics in a mens’ wardrobe. 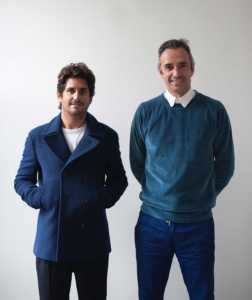 Inspiration comes intuitively to the pair of creators. They find inspiration in books they read, journeys they go on, even in the day-in day-out surf trips to Porto’s beaches. Today, for example, on his way to the store, José Miguel came across a delightful former “sailor” with a well-trimmed moustache and some very interesting stories to tell.

He asked to take his photograph. The gentleman, whose grizzly figure revealed 40 years of arduous labour in an old shipyard, proudly agreed, all the while telling him it was precisely on that street in downtown Porto that he had worked most of his youth. The man would later walk him to the end of the street to show him the structure of a shipyard where there had once been a rope factory, strategically built next to a river, intended to supply ropes for the vessels.

While La Paz’s co-founder tells us the story, filled with fascination and enthusiasm, he goes through his iPhone’s gallery to show us the images he collected. «You can tell this gentleman isn’t all dressed in black by mere chance; notice all these layers that he has on, an inside sweater, a turtleneck, a shirt over his sweater, a flannel coat and a sailor hat», he recalls, pausing to comment to his long-time friend André Teixeira that the shirt the old man was wearing was very similar to a model they previously developed.

We are in one of the most emblematic spots in town, Porto’s district of Ribeira, where La Paz’s store is located. Two windows typical of the city’s architecture illuminate the whole space, covered with wood and decorated with nautical references. We look outside and glimpse the marvellous Douro River. If we were to follow the course of the river, we’d find the Foz district and, further ahead, the beautiful beaches.

It’s not surprising that the vision of these two friends is so intimately connected with the seaside atmosphere. So it goes, describes José, that the relationship of Porto’s townsfolk with the sea is unique. «André and I have known each other forever and we continue surfing together regularly», he says, stirring up some memories. «I can still picture my grandfather coming home after three days of fishing, super tanned and covered in salt petre, wearing flannel shirts, fresh fish wrapped in a newspaper under his arm», he remembers nostalgically. 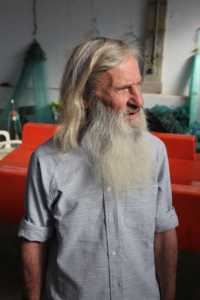 It’s this universe filled with memories and genuine people that distinguishes La Paz. «We rely heavily on the old days, what we find in our grandfathers’ wardrobe, because in those days men had a different awareness when it came to clothing, they wore a hat and a pocket watch, they were more elegant», says André Teixeira. On the table is Huw Lewis-Jones’ “Face to Face: Ocean Portraits”, which reveals other stories of people who, like José Miguel’s grandfather or the old sailor, dedicated their lives to the sea. Throughout almost an hour of conversation, José digs through each page, searching for new creative references to share.

The year was 2011 when these long-time friends began to realise their brand. José Abreu was working in a small communication agency preparing to move to Angola. André Teixeira was managing his distribution business, La Paz Merchant Studio (from which the brand inherited its name), but wanted to evolve into a more creative area. This turned out to be the perfect timing for the two friends to join paths.

«La Paz is a local brand that seeks inspiration in the Atlantic Ocean, our beaches and our traditions», the founders introduce. «The small scale of our brand allows us to always work with Portuguese fabrics and side by side with local producers», they explain. The reinterpretation of the traditional shirts of the fishing village of Nazaré, the socks hand-woven by fishermen’s wives on Madeira Island and the adaptation of caps used by Corvo Island’s fishermen are some of the most emblematic examples to shine a light on La Paz’s unique revival of traditions.

As a tribute to the country’s culture, each article designed by the duo is named after a Portuguese family. In the current collection, we find the Castro shirt, the Baptista jacket, the Carneiro sweater and the Pinheiro hat. Cultural influences aside, the brand’s aesthetic is defined by a simple, modern and sharply timeless design, where the blue, orange, yellow, pastel and water tones are in regular attendance. But what really sets this brand apart, though, is its raw and sturdy features, the high quality of the fabric and its classical-based masculine lines, all of them obtained from meticulously curating materials and textures. 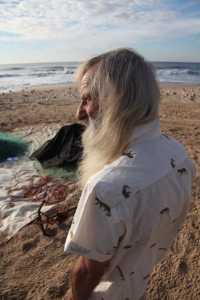 La Paz products span through several age groups. You can tell this by the 67-year-old model, who is the face of all the brand’s look books – the emblematic Mr. Pereira. «We did not want a conventional model, we wanted an authentic and charismatic gentleman, whose life was directly connected to the sea», recalls José Abreu. «When we first saw Mr. Pereira we immediately knew he was the right person. He’s a man who sells fishing nets in street markets and, although never having been a fisherman, has a pronounced ‘Sea Wolf’ look», reveals André Teixeira, adding that his figure doesn’t go unnoticed.

«We felt that if Pereira looked good and seemed cool with our products, everyone, regardless of age, would look too», José Abreu jokingly adds, exchanging a complicit smile with his co-worker. And so it happens, «the brand is worn and appreciated by a very diverse market, in terms of age and even of style», they clarify. Currently, La Paz products can be purchased at the brand’s online store or in several multi-brand stores, distributed throughout England, Spain, Italy, Switzerland, China, Korea, Japan, Thailand, USA, Mexico, New Zealand and Russia.

Despite their shared love of the city, choosing Porto for the brand headquarters isn’t only related to their personal interests. Recognizing the enormous potential of the textile industry in the north of Portugal, this is a strategic position for La Paz. «Being here grants you easier access to factories and suppliers, and a close and trustful relationship with producers and craftsmen», adds André Teixeira, revealing that, even this morning, he had already visited the producers at the neighbouring cities of Braga and Barcelos. «Until it gets here, a single product can go through more than 30 people, so we want them to identify themselves with the brand and feel part of the team», says José Abreu.

In the future, the duo hopes to open more of their own stores. London, Paris and New York are on the table. For now, though, their main concern is to solidify the infrastructure, improve distribution and emphasise their presence in the stores where they already are. The new collection is already on its way abroad. Through a creative interpretation of the Island of S. Tomé, José Abreu and André Teixeira propose fresh garments made of cotton and linen, using a colour pallet in which water tones shine bright. Besides the charismatic patterns of La Paz’s shirts, the duo slips in their introduction of tricot knitwear, a new jacket model and a few fluorite tones, reminding us of the sea’s youth. The rest, they say, it left to the eye of the beholder. 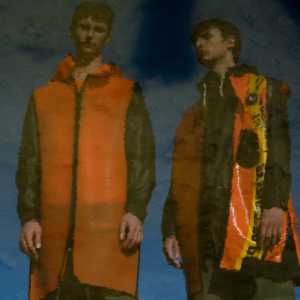 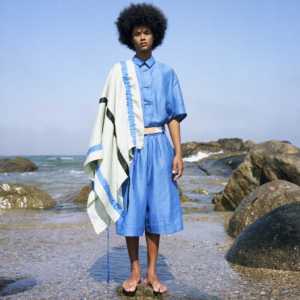 There Are More Tides Than Sailors