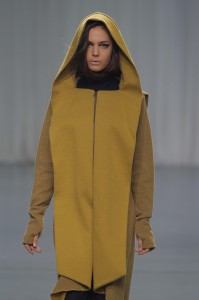 Fashion as a way a life is an increasingly closer dream to new Portuguese fashion talents, who have tapped different initiatives and a wider market opening to grow commercially.

Estelita Mendonça, who won the Best New Talent’s prize in Fashion Awards 2012, has her collections on sale at Espaço Bloom’s pop-up store, in Oporto’s Centro Comercial Península – a Portugal Fashion initiative that has been, in commercial terms, a launching pad for several new talents. Recently, the young promise carried out a project with Volvo. «With Fashion Awards’ prize came a proposal from Volvo to “dress” the new Volvo V40 for a road show», he reveals. Online sales are another project being prepared, one of the common points with other new generation designers.

Meanwhile, Carla Pontes already sells in Oporto’s Muuda, in Viseu and in Ivo Maia Designers in Santa Maria da Feira, and she is also considering embarking soon in electronic commerce. «I’m thinking in the online part, because I think it can work very well. I will now do a test via Facebook to see if people follow, how do they react to the collection, and how to sell online, and if it works, I will move forward» she announces.

The brand Klar – Alexander Marrafeiro, Andreia Oliveira and Tiago Carneiro’s new project – went from intention to action and already has its online store, which opened on the same day that was presented its second collection in Espaço Bloom, last March. «First emerged as a practical matter and as a result of our common opinion about the national perspective of fashion», explains Alexandre Marrafeiro. «Our bet is really online and abroad, preferably», adds Tiago Carneiro.

Besides, international perspectives are a common denominator. «I want to continue to work the brand and am focused abroad», reveals Diana Matias, whose collection will go on sale, between June and September, in a temporary store in Tróia,