Aged 22, João Melo Costa is more and more a Portuguese fashion’s safe value, which after the nomination for the Fashion Awards has his eyes set on Paris.

Late last year, in Fashion Awards’ last edition, João Melo Costa was surprised with a nomination for New Talent’s category. «My first collection was selected right away. I was not expecting», admits the young designer, who believes that «it was good, because people began hearing from me and pay more attention», he explains.

Over the last year, the designer has grown in the fashion world, although not without pressure. «It was a year to release myself from some creative prisons that I felt could begin to dominate me. People’s expectations and my bet in Bloom – I began to wonder if I would have to adapt my work to a record much alike Blomm’s. I was starting and I did not know very well what I was doing. It was a year to discover myself, to realize what I like to do», he adds.

The result can be seen on the catwalk, with a personal collection about mourning. «My collections have always a lot to do with me, with my life, and for now, my life is in Portugal. I really like the sea, the old fishing nets, and people working in those fishing nets», he points out. Therefore, nets are part of his coordinated pieces, which tell a story that begins with optimism and then ends with the disappearance and death at sea – a well known reality of Portuguese people.

As for the future, the ambition of the young creator goes by internationalization. «I think my work has enough quality to be validated abroad», he stresses. Therefore, Paris is one of the goals. «I would like my next collection to be taken to Paris by Portugal Fashion; I think it would be good for everyone. I’m young, I have a fresh, new image out there that will show that Portuguese fashion has a future», highlights João Melo Costa. 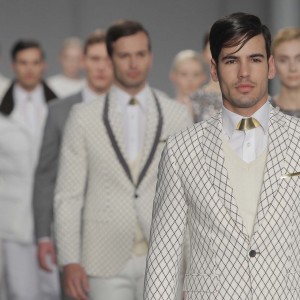 Having won the award in 2002, Felipe Oliveira Baptista is now the president of the jury of the prestigious Festival d'Hyères,...