“Forest”, a reflection on the relationship between nature and urban spaces, is the concept of Hugo Costa’s new collection. The

designer created sweaters and jackets with fluid and masculine forms, as well as pants, which are sometimes above the ankle. Nature reflects the colours, the dense forests glows and shades that are so close and so different. In urban areas are highlighted the need for practicality and identity. 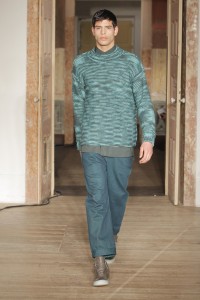 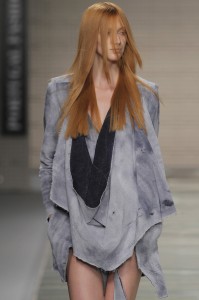 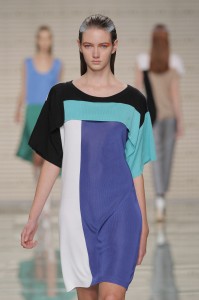 The result is a collection with «clear streetwear influences, processed and interpreted in classic men’s clothing. The colour is displayed as a block, standing out different shades through fabrics reflections, highlighting the texture instead of colour combination», explains the designer.

In fashion since the age of 19, after leaving a Computer Engineering course for Fashion Design and Textiles at Castelo Branco’s Escola Superior de Artes Aplicadas, Hugo Costa has been growing every season, specializing in menswear directed to an «urban» and «cosmopolitan» public. Transparencies, layers and opacity games are part of his brand’s DNA, as well as the predominance of black and other dark shades.

Presently working in his own brand, as well as with several Portuguese clothing and footwear brands, the designer was Ricardo Dourado and Ricardo Andrez trainee, and last December, supported by Portugal Fashion, presented his work in Matadero – Centro de Creación Contemporánea de Madrid.

Growing all the way

The glamorous years of Hollywood of the 1940s and 1950s, revamped by the hands of the Alves/Gonçalves duo, are back...