Luís Onofre settles down in the capital

Avenida da Liberdade, in Lisbon, has a new point of attraction for the female audience: Luis Onofre’s shoes.

The list of reasons to visit Avenida da Liberdade, in Lisbon, gained yet another item, with the opening of the first brand store of Luís Onofre, on January 22nd last.

With an area of 70 square metres divided into two floors where the sophistication of lacquers and mirrors reigns in a design by architect Mário Sequeira, the store opened with the spring-summer 2014 collection named Different Flavours, which brings together models painted «by a seemingly random choice of colours, but which was carefully studied», according to the designer, who mixed up violet, green, blue, fluorine, pastel, pink, salmon, chocolate and fuchsia in his proposals.

Having searched for the ideal location for years now, Luís Onofre seems satisfied with this first store in the capital. «It is the result of a four-year search for the ideal point-of-sale for the entry of the brand. In addition to being a commercial profile test, it will also serve as basis for an international expansion strategy», reveals the designer.

Moreover, he points out, it is the ideal place to test models considered less saleable. «The first day the store opened, a single model sold out completely. I would have never guessed that a shoe would have so much demand», he mentioned.

Created in 1999, the Portuguese brand of footwear and accessories, which is a regular presence on the runway of Portugal Fashion, has been conquering the international markets, including Spain, France, Italy, The Netherlands, Russia, USA and China, being now committed to expansion into South America, particularly Colombia. 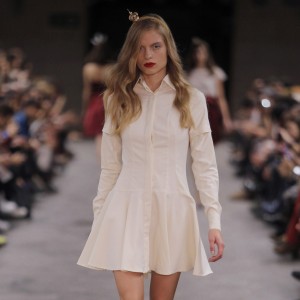 A Decade of Storytailors

The Portuguese brand of fashion accessories in cork and its mentor, Sandra Correia, won the prize AmCham Tribute. The...