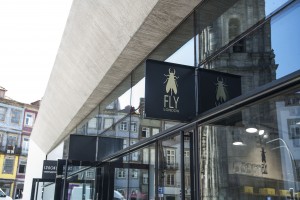 The Portuguese footwear brand in now at Passeio dos Clérigos, in a place that promises to be much more than a simple point of sale.

This Oporto new brand store replaces the one nearby Coliseu and tries to reach a new kind of public. «Porto is today a major tourist destination, both in the so-called backpacking tourism provided by low cost travel, either in a higher level tourism, with foreigners attracted, for example, by Port Wine», explains the brand’s marketing manager, António Alves.

Therefore, the Clérigos area is the brand’s focus, which under the motto «Always progressive. Never conventional», tries to reach these potential consumers. «Currently, Clérigos area is Baixa’s point of convergence and action», he justifies.

With a few weeks of existence, the store has, for now, been a real success. «In the very first week we noticed a difference in people’s influx, and they were not only tourists. With this location, we managed to reach more people», recognizes António Alves.

António Vieira, who belongs to the Fly London team, was responsible for the new space image and decor and the execution of the works was handled by Pedro Macedo.

Inside, autumn-winter’s new collection takes the centre stage: men and woman’s shoes in contrasting colours, along with different finishes in leather, cork, acrylic, wood and rubber.

However, more than a selling point, the store aims to be a meeting point between the art of fashion and other artistic expressions. «There’s the purpose of including some exhibitions to give the opportunity for young artists to show their work. We want to pep up the store in a more cultural component, even because Fly London has irreverence in its DNA», says the marketing manager.

Already on agenda is a program in partnership with Portugal Fashion’s next edition, scheduled from the 24th to October 26th, at Oporto, which will include one or more artists.

At the moment, Fly London has five stores of its own – in Oporto, Lisbon, London (two stores) and Copenhagen – and is preparing the opening of a new point of sale in the UK. «For now, I can only unveil that it is not in London», reveals António Alves.

Deities on the catwalk

Screen of the brain of FOB

Deities on the catwalk

In a true ode to women, Fátima Lopes made a Greek goddesses fashion show in the Hôtel National des Invalides. "Odyssey"...