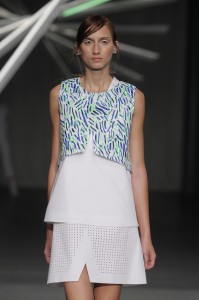 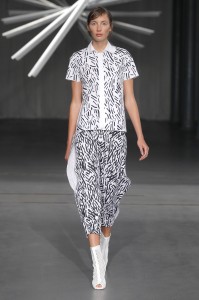 In two years, Carlos Couto trained in fashion design, was distinguished with two awards and has captivated public attention with his collections under his own name at Portugal Fashion’s Bloom, which he accumulates with his work in the Petratex design team.

Fascinated by the arts from a very early age, which led him to attend the reputed Soares dos Reis Secondary School, Carlos Couto was three months away from completing his 12th year of schooling when he decided, irrevocably, to follow a career in the world of fashion.

A decision that was to take him to London, to the prestigious Central Saint Martins where he studied for a year and, upon returning to Portugal, led him to attend the design course at Modatex.

A little more than a year after having completed the course, and after having participated three times in Bloom, the Portugal Fashion space dedicated to new talent – and winning the 1st prize of Portuguese Fashion News and the 1st “Golden Needle” competition in 2012 – the life of the young designer changed. “Professionally, I am currently working in an industry in the area of fashion, as a designer,” he reveals. Petratex, known and recognised for his heat-sealed seams and for being the establishment where Speedo produced the famous and controversial LZR Racer swimsuit, threw open new horizons. “I have produced in all areas. I work with all sorts of brands: men, women, sports… From Zara to Balenciaga,” he states. 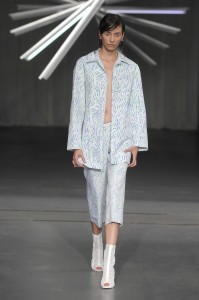 An experience that he used in his most recent collection – Warp – for the spring-summer 2014, where his sealing plays a leading role. “Everything is sealed. The collection is basically cotton poplin, printed and sealed. The fabrics are very basic but with the sealing they gain a rich allure”, the designer explains.

The inspiration was drawn from the work of Roy Lichtenstein, one of the most respected names of Pop Art, who elevated pointillism to a new height, a technique that Carlos Couto used in skirts, dresses, waistcoats and sweaters, portrayed in black and white, with occasional splashes of green and blue. “The idea was deformation and from this starting point, taking a formal circle and making these curves – which is why the collection is also called Warp.” Fresh proposals, designed for “a contemporary woman who obstinately seeks the ideal of perfection,” he summarises.

Yet another step towards achieving his goals in terms of a future career. “Now the idea is to show, show and show, so that the brand starts to become visually engraved in peoples’ minds. This is a more conceptual fashion so that later, more in the future, the big leap can be given,” the designer unveils.

Just in time for Christmas shopping, Diogo Miranda launched his online store and put a stop to the excuses that Felgueiras...