Screen of the brain of FOB

Mood boards, press clippings, photographs, interviews, fashion shows and creations… Everything fits under “Screen to the Brain”, the central piece of the exhibition inaugurated this last 17 October at Mude (Design and Fashion Museum) which recreates the 10 years of Felipe Oliveira Baptista’s career.

The anthological exhibition, a partnership between Mude and CENIT – Centro de Inteligência Têxtil under the ‘Porto Fashion Show’ project, takes the visitor on an unusual journey weaving through the most distinguishing traits of the creations of this designer born in the Azores who lived in Lisbon and then, after a period in London, established a firm footing in the fashion world of Paris. He is currently one of the most highly reputed names, both for his work under his own label and due to his creative directorship of Lacoste.

Methodical and obsessed with archivism – he keeps all the items he creates and respective mood boards in book format – Felipe Oliveira Baptista unfolds before the visitor of this exhibition a creative process which is heavily inspired but even more heavily ladened with work, fearless of being accused of nonsense and antagonism, which actually confer a very specific overall feeling to his collections.

This is what Alexandre Betak, a true star in the world of scenography, with work from Dior to Rodarte, wished to convey when he created Screen to the Brain. “The first thing that I saw was his inspirational notebooks, which he keeps carefully, all very well organised. And the first idea that I had was that I needed to find a way to show the largest amount possible. Usually, quantity is not important but, in this case, in order to portray 10 years of how his head works, it’s essential to show a great deal, all the wealth of his different inspirations, and which are my own inspirations too,” he reveals. His identification with the Portuguese designer’s work also enabled Betak to instinctively understand how to show the concepts that stand out in the 20 collections created by Felipe over this decade of work, starting from his very early days, such as at the Hyères Festival, where he won the Grand Award of the Selection Panel in 2002. “In everything here, it was important to work the contrasts, the dichotomies, woman-man, nature-technology, earth-space, nude-dressed – there are many evident dichotomies which are highly representative of his work,” he adds.

The exhibition, open and free of charge, with plays of lighting and mirrors, offers “a general panorama that had not been possible up to date, even if everyone were to know all of Felipe’s collections. By placing a large part of his collections and the themes on which he progressively worked, we begin to have another perception, a truer one, of the dimension and coherence of his work. The designer must certainly view his own work in a different way,” Bárbara Coutinho believes, the curator of the exhibition and director of Mude.

A vision confirmed by Felipe Oliveira Baptista himself. “I find that it is an interesting exercise to look back, over 10 years, and produce an exhibition that is not a classic chronological retrospective but rather something like a new project made with the archives,” the designer explains.

Protection, New Uniforms and Work Clothing, Variable Geometries, Revisiting the Classics and Technology versus Nature are the five core elements into which the 130 outfits of this exhibition are divided, reflecting a brilliant mind that can be discovered, at Mude, until 16 February 2014. 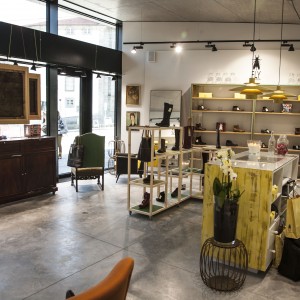 And the prize went to...

The Portuguese footwear brand in now at Passeio dos Clérigos, in a place that promises to be much more than a simple...