Between the past and the future 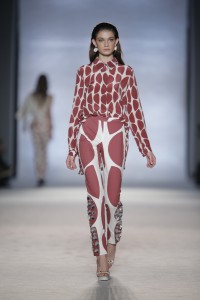 On an ending note to the celebrations of 25 years of career, Miguel Vieira created a collection for the next warm season which is a perfect symbiosis between the past and the future.

“This is a collection which involves origins, in two aspects: the origin when I started to work 25 years ago, when I began with woollens, the knitwear I made incorporated a lot of gemstone work; as well as the origins in terms of the planet, i.e. the oceans, forests, birds – all those elements are embroidered with crystals,” the designer explains.

Pure and stylised lines, but with a visibly classic touch, mark the collection, as well as plays of textures “of patterns developed by the atelier, whether in the form of prints or gemstone work. The colours are dominated by shades of pastel, combined with the elegance of black, the simplicity of white and the confidence of navy blue,” Miguel Vieira points out. 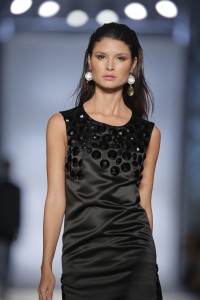 “The collection has already been presented in June, at international events, and it’s being well received,” reveals the designer who also displayed his work at Moda Lisboa and Portugal Fashion, where his show was preceded with a video celebrating the 25 years of his career.

“It was deeply moving for me to see the video, which also included the many people who have been part of my life for so many years now,” Miguel Vieira confesses. “Regardless of whether people like my collections or not – and they usually do! – what I think is important, above all, is the amount of friends that one creates over time, a sort of second family. And it was extremely moving to see all of those friends of mine, who are professionals in different areas, coming to offer me their congratulations,” he concludes.

In her fourth collection, Teresa Abrunhosa brought the sensuality of the 1980s back into fashion for spring-summer 2014. The...