From British inspiration to sales in Angola, Júlio Torcato is an increasingly international designer, as proves the new collection for spring-summer 2013.

Inspired by the classic elegance and urban lifestyle in the streets of the British capital, the proposals of Júlio Torcato for the warm season of next year pay tribute to the city of music, where tradition and modernity intersect with originality and humour.

«This mix of classical with sportswear ends up being a recurring theme in me», considers the designer. «It’s that urban Nomad, a person who mixes things, born from a street culture, London in this case, where there is a very strong tradition of tailoring – Savile Row, for example – and then there are those street markets, that youth culture, the mixture of races, the mixture of music, things are created, musical movements are born. And we, as designers, also try to create things», believes Júlio Torcato.

To the sound of rock, the models walked down the runway wearing wide silk trousers, narrow-cut suits in green, and grey shorts combined with knitwear, in green and purple, for a more casual look. The designer further provoked the audience by dressing actress Rita Pereira with his male pieces and with neckties, made of hair, from the suits. «It is the provocation of playing with an icon. The most classical piece in menswear is the suit and tie. Provocative, here, with a human-hair tie», he mentioned.

Increasingly looking abroad, the designer based in Trofa continues to bet on the Angolan market, where he «has developed more contacts», as he indicated. A project of persistence, seeing as «Angola is a sui generis market. Whoever wants to open a business in Angola, has to have an Angolan partner, otherwise he’ll have to invest a million dollars», he stressed.

But the potential exists, so much so that the designer will return to the country next month. “On our part, there is a will, obviously, because we want to become international, especially in a market that, in my opinion, in terms of man (and woman too) consumes top-of-the-line products», he concluded. 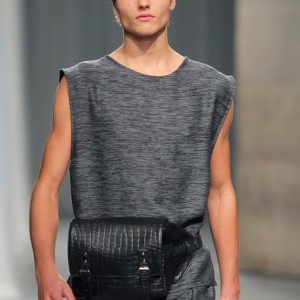 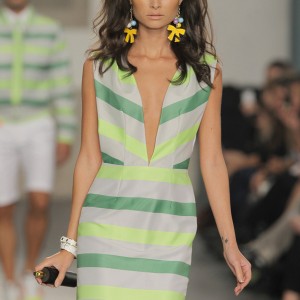 The young designer, who won last May the first "Agulha de Ouro” (Golden Needle) contest, revealed, in the latest edition...