The Geographical Society of Lisbon hosted the first fashion show of the Alves/Gonçalves duo at Portugal Fashion, unveiling a collection for autumn-winter 2012/2013 marked by elegance and femininity.

The first time Portugal Fashion descended to the capital, the Alves/Gonçalves duo premiered in the event with the presentation of proposals for the upcoming cold season.

The duo, with a career almost 25 years old, presented proposals where the imperial look dominated, in a faultless blend between classic and modern. Sumptuous pieces, with perfect cuts, paved the way to an elegant woman, with waistlines marked by golden belts and a balanced play of materials, maintaining however a discrete elegance.

But the “Manéis” – as the duo composed by Manuel Alves and José Manuel Gonçalves is also known – didn’t stop innovating, surprising the crowds that filled the Geographical Society of Lisbon with a collection that defines “new silhouettes, new proportions of curved lines and intense, voluptuous and volumetric shapes” and creates “a dense look with great female intensity in a cosmopolitan and intimate environment”, as they describe it.

The raw materials are “noble”, such as silk and wool, but also “more technical, dense and bright”, giving rise to coats with double collars in red and grey and skirts with an almost futuristic glow for autumn-winter 2012/2013. 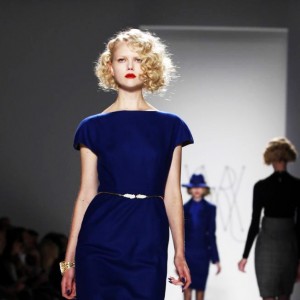 Navy blue is the new black

Just as the owl that opened his last fashion show in Portugal Fashion last March, Júlio Torcato too is ready to "spread...