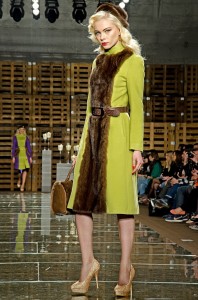 The designer from Fundão revisited the past to create a sophisticated collection that promises to warm up the cold season ahead.

The designer, known for dressing First Lady Maria Cavaco Silva, proposed for autumn-winter 2012/2013 a collection inspired by the 20s, 30s and 40s, “in a time considered by many as the most beautiful and sensual of the 20th century”, explains the designer.

Also a time of mixed feelings, where the movements of manifestation of war contrast with the Hollywood stardom. “The actresses create multi-faceted images, giving emphasis to fashion. Women of that era become attractive and charming”, reveals Carlos Gil, having created with this: “a very feminine silhouette, accentuating her shapes, emphasising the shoulders and hips, while marking the waist”.

This feminine silhouette, with long shiny bandeau dresses, is further supplemented by vintage details, such as the application of fur on the sleeves or on details, and military elements – very present in the coats – that hint ‘austerity’. 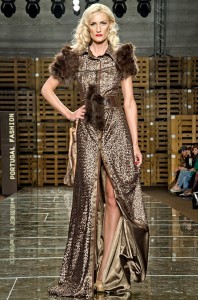 Austerity, however, is not reflected in the materials, where in addition to the fur you have cashmeres and wools, combined with lace and paillettes. “The fur and brocades, and the sets in vivid and contrasting colours, convey a touch of refinement and glamour”, ready to take on the colder temperatures, concludes the designer. O criador do Fundão revisitou o passado para criar uma coleção sofisticada que promete aquecer a estação fria que se avizinha.

Starting over at MDS

The world is my oyster

Starting over at MDS

Being in the Portuguese market for over 20 years, MDS decided to bet on the leitmotiv "New Beginning" for the autumn-winter...