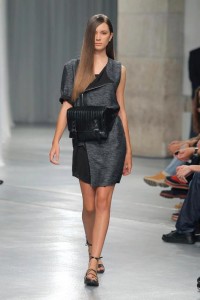 The young designer, who won last May the first “Agulha de Ouro” (Golden Needle) contest, revealed, in the latest edition of Portugal Fashion, the collection that he developed with the support of the atelier created by French businessman Gilles Zeittoun.

Carlos Couto is another new talent in national fashion to keep an eye on. The young designer, whose education began at the prestigious Central Saint Martins in London, followed by Modatex, managed to convince, last May, the international jury of the “Agulha de Ouro” (Golden Needle) contest – composed by José Gonzalez and Odete Santos (both of the Atelier des Createurs), Chloé Zeitoun (Eniana Velcani House), Paulo Vaz (ATP), Braz Costa (Citeve) and designers Miguel Flor and Pedro Mourão – with “Whitevoid”, a collection of men’s clothing designed for the year 2020, i.e. the theme proposed by the Organization of the contest.

“It is a collection that tells us of the relationship between man and “white” space and the appropriation of it”, explains Carlos Couto, who designed sets with a total look in a gradient of grayscale to black. “It ends up being an interaction between it and the object, whether functional or simply decorative”, he adds.

“Whitevoid” was presented during the last edition of Portugal Fashion, at a special event dedicated to the contest, but this wasn’t the only time that Carlos Couto received applause at Alfândega do Porto. By winning the contest, the young designer received 2,000 euros and the possibility of materializing the collection at the Atelier des Createurs, in Porto, who organised the contest.

“Uncommon”, as he named the lady’s collection resulting therefrom, “was born of the idea of travel, an idea that also has to do with the concept of Pilgrims, and was basically transformed into more sportswear and androgynous forms”, he explains. “The male influence is visible in the collection, both in the colour palette of darker shades such as black, silver grey, green and pastel pink, and in the coarser materials, like the thermo-bonded napa, the fantasy denims, the knits with membranes, tricots and jacquards”, he enumerates. And, “since we are talking about travel and pilgrims, there is also a research on maps and cities, which are represented in the patterns”, he reveals.

These are the first steps of a designer who this year also won the NPF – Young Designers Contest, in March, and promises to continue being a topic of conversation.

Always ready to reinvent themselves, Manuel Alves and José Manuel Gonçalves surprised with a different collection for the warm...